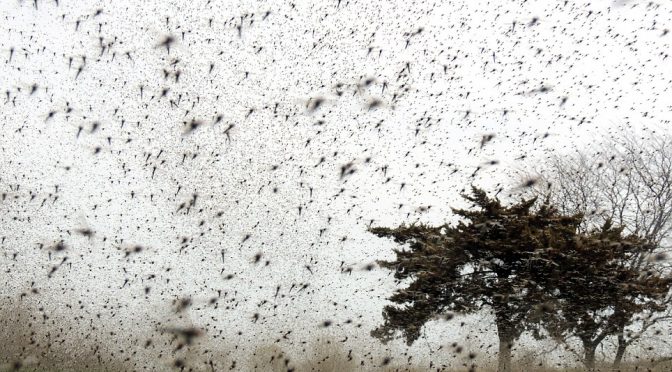 So the LORD said to Moses: “Pharaoh’s heart is hard; he refuses to let the people go. Go to Pharaoh in the morning, when he goes out to the water, and you shall stand by the river’s bank to meet him; and the rod which was turned to a serpent you shall take in your hand. And you shall say to him, ‘The LORD God of the Hebrews has sent me to you, saying, “Let my people go, that they may serve Me in the wilderness;” but indeed, until now you would not hear!

A few months ago my youth pastor was going through the book of Exodus with us. We spent several weeks looking at the plagues. He talked about how each of the plagues was showing one of the Egyptian gods for what it was, fake. He also pointed out that some people, trying to disprove the existence of God, propose that the ten plagues were a natural string of causes and effects. I had never heard of that idea before.

Lately I have been thinking about it some more and perhaps there is a reason that the plagues seem to follow a logical pattern. First the river turns to blood. That is not a normal occurrence, that is something only God can do. Next all the frogs come out of the river and into the Egyptian’s homes. This makes sense, the frogs couldn’t continue living in the river, but they could live on land. Then after all the frogs died, came the lice and  the fourth plague flies. This also works with the cycles of nature, plies of dead frogs attract swarms of bugs. Then the livestock are diseased. This could have been caused by the lice and flies transmitting diseases when they bit the animals. Then comes the boils. They don’t seem to be directly related to any of the other plagues, but they are still a sign of God. Then hail, and locusts to eat all the grain that was prematurely harvested by the hail. And then darkness. Clearly something only God can do. And lastly the death of the firstborn. Death of only the firstborn, and only if they were not covered by the blood of the Passover lamb. Such a selective widespread death could only be done by God.

Out of the ten plagues there is a sort of theme. Many of them seem to lead to the next, or the next cleans up after the first. Is this a sign that the ten plagues were not supernatural, or were they intricately planed by God?

If God did create the universe, if He designed all the laws that nature is governed by, if He is good like He says He is, then could the plagues prove his goodness? Yes, I think they do.

You see, if God wasn’t good,  if He wasn’t true, then He wouldn’t have made the world work according to logical laws. Because if He isn’t true, nothing is true, not even logic.

But if He is true, and good, then He could do things that both followed the laws that He ordained, and were above them at the same time. Because He is above the laws He ordained. Yet He still made the laws to reflect His nature, His truth. If there is no truth, then there is no way of something being true.

So the plagues seemingly leading into each other does not mean they were not supernatural. Actually it means the opposite! Nature could possibly have caused some of the plagues, but not all of them. The fact that they lead into each other means they were intricately planed, not randomly triggered.

Through all the plagues God finally freed the Hebrews from the Egyptians. He also proofed that He is God. The fake gods of the Egyptians were each debunked. And God was shown true.