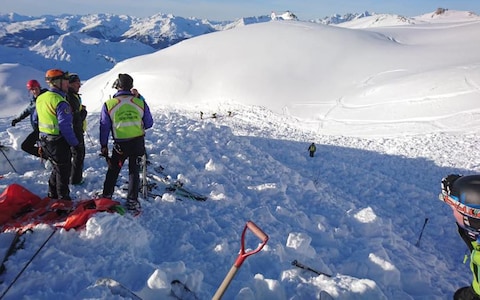 While skiing with his family in the French Alps on December 26 around 2 P.M. local time, a twelve year old boy was separated from his group when a chunk of snow broke off, creating an avalanche and sweeping him 110 yards away.

The boy’s jacket was not equipped with an avalanche beacon, so the Bourg Saint-Maurice police brought in a tracking dog to sniff him out. The rescuers found the boy buried in the snow at 7,875 feet altitude just 40 minutes later.

He was alive, and had suffered nothing worse than a broken leg. Using a helicopter, the rescuers transported the boy to the local hospital in Grenoble for treatment and to check for any other injuries.

The police called the rescue a miracle, noting that one’s chances of surviving being buried in snow longer than 15 minutes are slim. It seems that the boy’s survival was at least in part because some of the airways were not blocked, thus not smothering him before the rescuers were able to reach him.

“We can call it a miracle. A day after Christmas, there was another gift in store.” -Captain Patrice Ribes

It’s not every day that we recognize God’s hand at work, as more often than not we miss all the situations He keeps us out of. But every once in a while, when we hear stories like this and see how close things got to disaster we are reminded, once again, that God still does miracles.