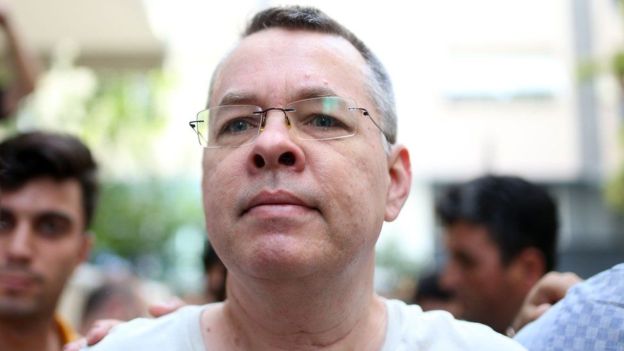 American pastor Andrew Brunsun, a missionary to Turkey, was arrested on October 7, 2016 with charges of immigration violation. He was arrested along with thousands of other Turkish soldiers, teachers, and journalists, many of which were innocent, following an attempted take over of Turkey in July 2016.

The charges were later changed to association with a terrorist organization which was politically opposing the Turkish government. During hearings in May 2018, both bazaar and unlikely evidences were brought to prove that Andrew had ties with Gülen, a Islamic terrorist organization, and was working to divide Turkey by “Christanizing” Kurds. But the witnesses who defended Brunson were basically ignored.

According to witnesses who didn’t even go by real names, Brunson talked to a lawyer about establishing churches in Turkey, and met with a gang of Mormons (who can allegedly be identified by a missing finger). According to Brunson’s accusers, these claims prove he’s an enemy of Turkey, working to divide.

Never mind the fact that it really doesn’t make sense that a Christian pastor who loves the Turkish people and his God would be working with Mormons, Muslims, or political zealots to bring about harm to the country he’s served in and called home for over 20 years.

“My service that I have spent my life on, has now turned upside down. I was never ashamed to be a server of Jesus but these claims are shameful and disgusting.” -Andrew Brunson

Despite the fact that Brunson is clearly innocent, the Turkish government has still not released him after two years of holding him as a political hostage. After considerable pressure from the US government, they did let him go home, but he’s still a prisoner.

President Trump sees that the charges against Brunson are hogwash. The president calls Brunson “a fine gentleman and Christian leader in the United States”, and says that he is “being persecuted in Turkey for no reason.”

Trump, along with the American Center for Law and Justice are actively fighting for Andrew’s release. On August 17 the Turkish court once again refused to let Brunson go, even after Trump put sanctions on Turkey, demanding that he be released. Still, the president has not wavered from the demand.

“We will pay nothing for the release of an innocent man, but we are cutting back on Turkey!” -Donald Trump

“He’s a pawn in a political game between Turkey and the U.S.” -Jacqueline Furnari, Brunson’s daughter

Brunson’s detainment has been a source of much strife between the United States and Turkey. And the longer his imprisonment continues, America and Turkey’s relations continue to grow worse.

It is easy to see that Brunson is in the epicenter of a political storm, but he is also in the middle of an unseen spiritual one. What it all comes down to is Andrew is being persecuted, like many Christians around the world, because of his faith in Jesus. This is the clear reason Andrew is being held hostage, and why the Turkish government won’t let him go, even though the charges held against him are clearly empty.

We may not have the political authority to make the Turkish government set Brunson free. But we can join with thousands of other Christians around the world and pray that the truth of the gospel will be shown even more strongly through Brunson’s faithful witness, that the hearts of Brunson’s accusers would be changed, and that in the end Andrew’s innocence will justify him.