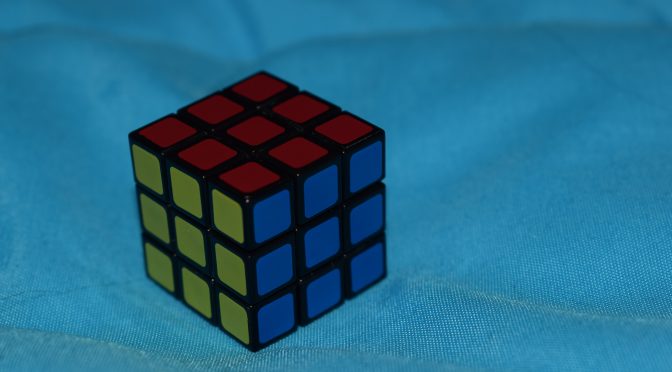 Have you ever played with a Rubik’s cube? It is a brain engaging toy. I got one as a gift and enjoyed tinkering with it. I thought I would just mess it up, and track back to fix it. Little did I know how hard that would be, and how long it would take me to solve it! Neither did I suspect the truths that could be hidden in such a small toy. Even if you don’t have a Rubik’s cube, these truths are for you.

#1: Only a few turns can mess up perfection

I opened the package, and it was perfect. But when I twisted it this way and that, up and down, I succeeded in forgetting all the moves I had made. It was now confused, and it only took a few turns.

It just takes one commandment broken to break perfection. We as humans have become, like my Rubik’s cube on the first day I had it,  imperfect. And we can’t fix our mess.

#2: Destroying is easier than restoring.

My Rubik’s cube was a lot of fun! If all I wanted to do was turn it. I could do that very easily, but if I was supposed to solve it, I would soon tire of tinkering with it. Why? Because restoring is hard.

After the fall, things naturally fall apart. Anyone can break things, while not just anyone can make things. All of us sin, and only God can fix the mess we’ve made.

One of the oldest tricks to fake solving a Rubik’s cube is to move the stickers. If you can’t get the last white piece where it needs to be, just move the sticker! The problem is, once the stickers are moved, you can no longer move all the pieces where they need to go, since they aren’t labeled properly. You can’t know which piece is which.

When we choose to lie about our sin, which we can’t fix, we convince ourselves we have no problem. And if you don’t think you have a problem, then you can’t get it fixed. Covering your sin makes the healing process much more painful.

#4: Sometimes undoing is part of fixing.

When I tried to solve the cube, I never got far, because I wanted to keep everything I had done. But to continue, I would have to temporarily undo what I had done while getting a different piece in place. This frustrated me, but eventually, I did it, and it turned out ok.

Sometimes in life things have to be temporarily undone, while something else is put in place, and then the original can be put back. We have to loose our life to find it. If we cannot learn to undo, we will miss out on so much.

#5: When you get lost, go back to the beginning.

Often I would follow the algorithm and get to a certain part where I would get confused and do the wrong turns. I’d try to back track, but I only got the cube more jumbled. Then I simply had to start over.

When you get lost, when you forget what you are supposed to do, go back to the beginning. When we can’t remember why we go through the motions, its time to go back to our first love. If we don’t remember the first love, we won’t know what He wants us to do next.

When you do hard things, like solving a Rubik’s cube, it grows you. Through spending time and brain power solving the cube, it literally grew my brain. When you exercise it grows your muscles. Your brain does the same, and so does character.

Since we live in God’s world, everything in it, even toys, point to Him. Yes we are fallen, so the things we make are not perfect, but we can still point others to the truth through those things. If you ask God to teach you about Himself, I guarantee you He will. He will teach you through His word, but also sometimes He’ll use a Rubik’s cube.